I've been out on vacation back home in sunny, beautiful California with my son. In our travels, we went to Santa Cruz Beach Boardwalk for the glory of the Big Dipper roller coaster and for my son's first rock concert! Blue Oyster Cult was giving a free concert as part of a Friday night free concert series being put on there. 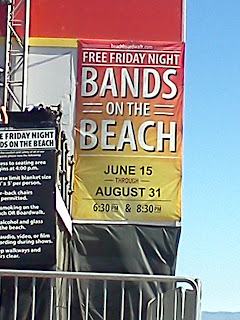 When we found my brother and our spot for the concert, I saw something interesting. In the back of the concert area was a sign marking the section for the deaf and hard of hearing. I thought that was cool and figured the distance from the stage was to protect anyone with already damaged hearing from further damage due to the loud music. The area also had bleacher style seating, which I thought a little curious, but didn't pay that much attention to.
So the concert starts, and the MC introduces the man who will be doing the ASL (American Sign Language)  interpretation for the concert. How cool! I thought that was pretty progressive to have an ASL interpreter at the show, but I wasn't really seeing how it would work. 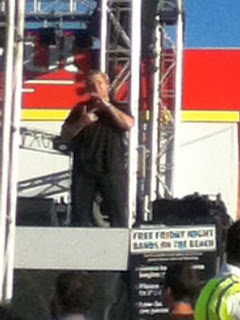 Now, I've been to concerts before with people who were deaf. I'll never forget seeing the group of folks I later learned were deaf at my first AC/DC concert. They were the brave folks who were really close to the speakers. I learned later it was so they could feel the music coming from the speakers. When the band did "For Those About To Rock," the group would all jump and cheer each time the cannons fired (if you don't know the song, yes I said cannons for a 21 gun salute). It was an incredible sight that undoubtedly made a lasting impression. So the idea that you couldn't enjoy music if you have any sort of hearing impairment wasn't one I had. There was also that Beethoven guy, but I won't dive into that story right now.
Back to Blue Oyster Cult. . .
The lead singer starts talking to the crowd making sure we're ready to rock.  The interpreter, standing on stage in clear view of the hard of hearing section, is interpreting what he's saying. Cool. I love people take steps to try to be as inclusive as possible. The band starts playing, and the interpreter stays on stage and starts signing the lyrics. Yes, you read correctly--signing the lyrics! Not only did he sign the lyrics, but he kept rhythm as best he could with the band! 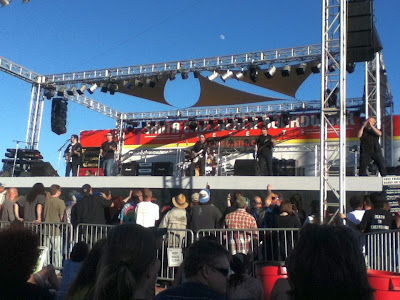 Song after song he was there signing and keeping up with body language emphasis in his signs to match the emphasis the singer had in his voice. Indeed he was burning for you! He did not fear the reaper! He really rocked it out during "Godzilla." He was really giving his interpretation his all, and that was outstanding. What's more, he worked alone. There wasn't a second interpreter to take over. He did it all and kept the energy going.

Then something the MC said hit me--he was tonight's ASL interpreter. That would seem to indicate that this wasn't an anomaly. This was a regular practice. So as fantastic as I thought the interpreter was, the fact that they do this for all of the shows really blew me away.
So of course, I started looking around to see who else is doing this. I figured it's 2012, this can't be that new. It's not. Digging around I saw video on YouTube of different acts with ASL Interpreters at their concerts. I also found a great story from NPR back in 2006 that looks at ASL interpreters. Apparently, under Title III of the ADA (Americans with Disabilities Act), auditoriums, amusement and recreation facilities are required to provide accessible services. So providing ASL Interpreters is another way that the ADA helps make even music concerts more accessible.
So you're probably wondering why I'm writing about this in a blog about assistive technology? Well, ASL does actually qualify as AAC, augmented and alternative communication. That makes it AT. While it isn't an AT device, it more closely resembles an AT service. So by providing the ASL interpreter, the concert promoter and the Beach Boardwalk were providing the necessary AT service so that members of the audience who sign could also "listen to" the song lyrics. In an indoor arena,  people with a hearing impairment may have been able to use an assistive listening device--an FM, infrared, or Bluetooth system-- to get clearer audio. However, that still leaves out individuals who would benefit from ASL interpretation. Some theaters are using portable captioning systems to allow those folks access to captions. There are even apps for smartphones and mobile computing devices that tie into existing systems a theater may have, insuring the user that there will always be a unit they can use. However, it still leaves the ASL gap. By providing interpretation services, you make sure that you are as inclusive as you can be. From a human perspective, you're recognizing that things are just more fun when we all can enjoy them.
If you're interested in more information about ASL, you should check out some great information from the National Association of the Deaf at http://www.nad.org/issues/american-sign-language.
For more information on ASL interpretation and sign language interpretation in general, you should check out the World Association of Sign Language Interpreters at http://www.wasli.org/.
If you want to check out that piece on NPR, you can read it or listen to it at http://www.npr.org/templates/story/story.php?storyId=5563282.

Here are some examples of ASL interpreters at concerts.

This is video from YouTube of an ASL Interpreter really getting into the music and expressing it in her signing.

Here's another interpreter at a Lady Gaga concert. She's in the lower left portion of the screen facing the audience.

Alana has to be my most favorite ASL interpreter for two reasons. First, she really gets into the interpretation. She owns it and "sings" the song instead of just "speaking" it. Her YouTube handle is lordalana, check her out if you frequent YouTube. Second reason why she's my favorite is because she's interpreting for AC/DC who is one of my favorite groups. This is her interpretation for "You Shook Me All Night Long."


And here's her fantastic interpretation of "Hell's Bells."